The holiday season changes dramatically when you’ve lost a loved one. Grief invites itself to your table. It sits in an empty chair.

Pouring through similar blogs and posts, I’ve found that Thanksgiving and Christmas strike a solemn chord with most bereaved Americans. Though these holidays are significantly different without parents, for me, the approach of New Year’s Eve/Day has induced a tremendous amount of anxiety.

Last year I celebrated New Year’s Eve with a handful of close friends on a boat docked on Lake Union. A few minutes before the countdown, we scurried to the deck to survey the area for a proper vantage point. I shivered as I drew a swig of sweet champagne into my mouth. I tongued the bubbles, pressing them against the back of my chattering teeth. A canopy of fireworks erupted above the Space Needle. Sparks rained down on the city. Smoky air wriggled around the deck as it rose from the boardwalk below. Couples snuggled. Corks, wrenched from their cozy bottlenecks, released great bursts of sound followed by the fizzle of carbonation and an overwhelming sense of newness.

I masked an ashy sigh under the explosions. This would be the last day I could say “I spoke to my mom earlier this year.” In a few moments, this narrative would change, never to return to recency. In the closing seconds before 2015 began, I whispered farewell to that phrase. Uninvited came my new narrative: “My mom died last year.” 2014 would no longer be this year, but the year I lost my mom.

The next morning, I was shocked to find that my wall calendar had gathered dust. I went to dismount it from the nook near my front door and my fingers slid through its feathery film like children through virgin snow. I stared at my grimy fingertips in horror. Time did not stop that April and here on my hands was the unsettling evidence. I panicked. Was my loss so long ago?

This year left me with a liminal sense of my loss being so near and yet also so far gone. One day I’ll not open the door to the heartache and the next it will crash through and come to swallow me up without warning.

“It’s so curious: one can resist tears and ‘behave’ very well in the hardest hours of grief. But then someone makes you a friendly sign behind a window, or one notices that a flower that was in bud only yesterday has suddenly blossomed, or a letter slips from a drawer… and everything collapses.”

This I find to be unequivocally true. I read this and I feel the calendar dust between my fingers as one would a phantom limb or an olfactory memory. I think of those Tuesdays I spent crying into an envelope I’d kept with my name in her writing. I think of our stoic faces at our meeting with the funeral home.

On the first anniversary of her death, we spread my mother’s ashes in a dewy evergreen cove behind my sister’s house. When we emerged from the thicket, an ethereal rainbow – quite uncharacteristic of Washington, despite our rain – split the heavens above us: 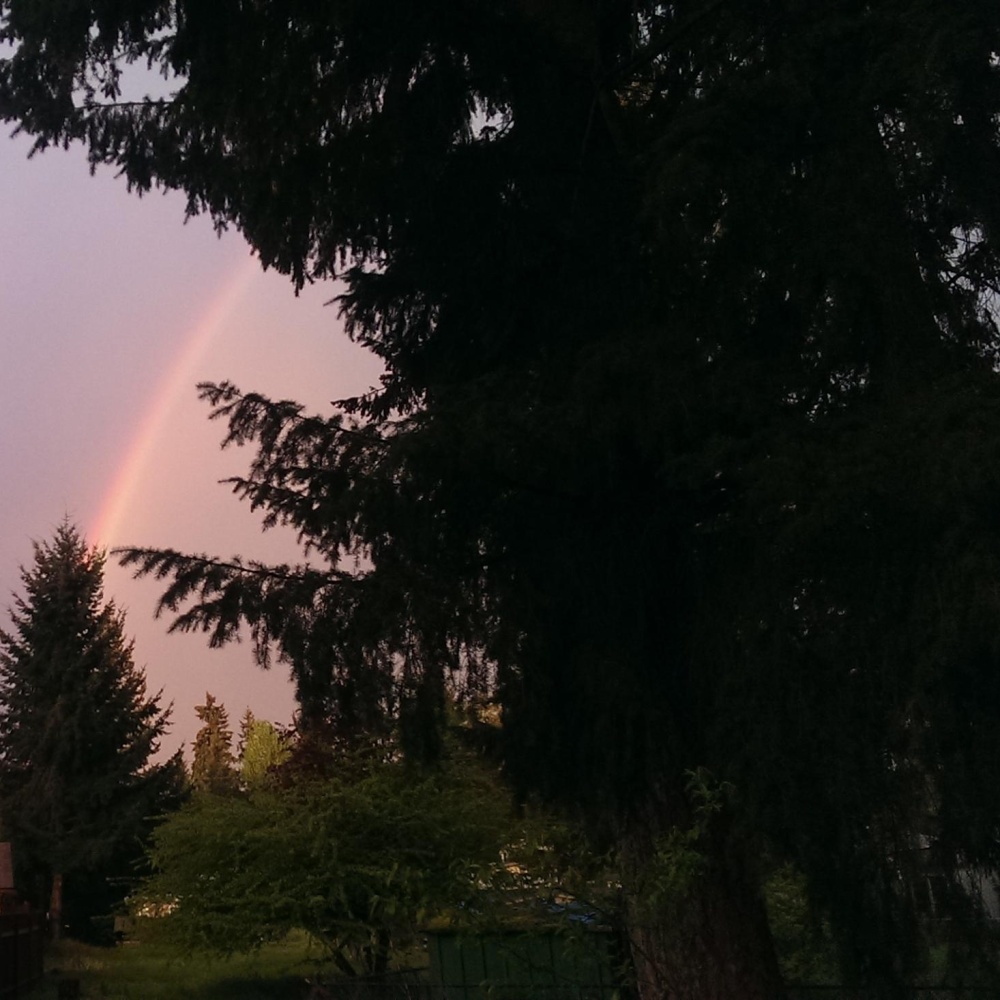 At that moment, more so than January 1, it felt like a new year. Perhaps it was the breathtaking dichotomy of the darker and lighter skies before us. Regardless, my narrative had changed yet again, and I experienced it quite differently – I nigh embraced it. It gave me an uneasy hope. In that moment, I accepted that every moment will usher in a new mystery of uncertain changes.

Grief is a new chapter. It is cloying, heartrending, bitter, and unyielding. It only begins after something ends. It is uncharted, but holds the promise of new happiness and a reverence for the past.

I leave you with one question:

What or whom do you leave behind this year?